Dreams that Turned Out to be True

Have you ever had a troubling dream that turned out to be true? Almost two decades ago, I had two dreams that would change my life forever. At first I was overwhelmed. How could this be?

In the first dream I am playing in nature, in a park-like setting, literally rolling in the grass, laughing with my high school friend. At the time of the dream I had moved far away from my hometown. In the dream, after rolling in the grass, my friend stands up, brushes off any debris and then walks ahead of me toward a small wooden bridge arching over a running brook. He begins walking across and I continue walking behind him until he turns around slowly, facing me. He shakes his head, no, as he extends his hand, palm facing me, signaling stop! While doing so, he says, “It’s not your time.” Immediately, I grasp his meaning and I awaken with a start!

I woke up with a foreboding sick-feeling in my stomach. I tried to shake it off but the dream haunted me. Within a few weeks my mother phoned me. She told me that my friend had passed. He’d died of complications from HIV/AIDS but I’d been away from my hometown for so long that I hadn’t even known my friend had been ill.

A year later, I experienced another troubling dream. In this dream, I’m in a park-like setting where I’m playing in nature with my high school friend, the same one who had passed, and another friend from high school. We’re all laughing together and then the two friends stand up and begin walking away from me. They approach, and then begin walking across a long bridge. As I’m walking behind them, they both turn at the same time to face me. They don’t have to do or say anything. In that moment, I know. Another friend from high school has just died. He came to me with the other friend, I’m assuming, to tell me goodbye, letting me know he had crossed over to the other side. Shortly afterwards I received another expectant call from my mother. She confirmed that my friend had died.

After these predictive (or psi) dreams, I could never look at dreams the same. Although many dreams are what I call “self-help” dreams in metaphor, some dreams seem to have another component altogether. They seem to know things I would not have any way of knowing in waking life. They seem to bridge the known and the unknown. Psi is derived from the 23rd letter of the Greek alphabet. Psi represents something that is not explained by known physical and biological means.

Are you interested in psi or predictive dreams? If so, you’re invited to join me at the IASD PsiberDreaming Conference, online September 28th through October 12th, 2014, where I’ll be sharing my presentation entitled, “I Dreamt Something Awful About You
Should I Say Something?” which I will be presenting on Thursday, October 9th.

By the way, if you’re not a member of IASD and you’re thinking of joining, this is the perfect time! Between August 1st and October 12, if you join IASD you get to attend the PsiberDreaming Conference for no additional charge!

In addition, we’ll be discussing psi dreams here, on our website. Join us! 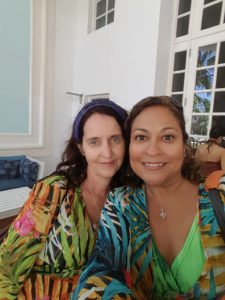 Glory Nelson and Sherry Puricelli met in 2004, quickly became friends, participated in – and facilitated dream circles, studied – and taught courses in metaphysics, participated in – and led retreats. One similarity, among many, stood out. They both lived archetypal themes. They approached their work in the same way, and they saw results! People who participated in their programs saw results too. Today they work with courageous individuals who are ready to transform their lives and themselves!